OTT platforms Vs Movie theatres? And the winner is……. - Retail Ritesh
1245
post-template-default,single,single-post,postid-1245,single-format-standard,fpt-template-bridge,ajax_fade,page_not_loaded,,qode-title-hidden,qode_grid_1300,qode-content-sidebar-responsive,qode-theme-ver-13.8,qode-theme-bridge,disabled_footer_top,wpb-js-composer js-comp-ver-5.4.7,vc_responsive 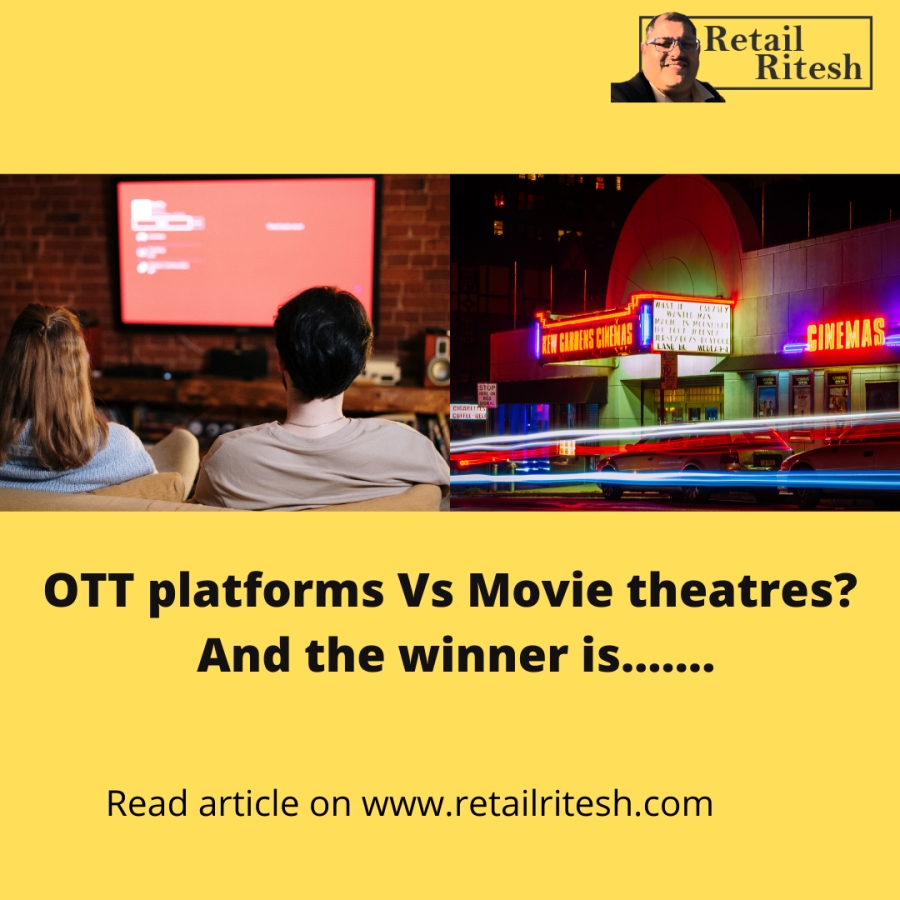 21 Jul OTT platforms Vs Movie theatres? And the winner is…….

Challenges being posed by OTT platforms on Movie theatres.

Being a movie lover, I have always been curious about the economics behind this wonderland of Cinema and its magic.

My curiosity was at its peak when I watched a new film starring Bollywood shahenshah Amitabh Bachan’s release on Amazon Prime “Gulabo sitabo” last month.

What is the meaning of OTT?

OTT means Over the top and media like Netflix, Amazon Prime, Zee5 are all part of OTT platforms.

Post watching the new release on OTT platform, the first question that came to my mind,

“How can a movie producer make money by releasing his asset on over-the-top (OTT) platform prior to its theatre release”?

As per the industry sources, more producers are now ready to follow the OTT route.

This throws a few questions for brainstorming.

Questions are too many to answer but let’s understand the business of Movies and its future.

OTT vs Movie Theatre – The magic of Big screens

Imagine a Bollywood Blockbuster movie like Bahubali, which swept the nation in viewership getting released on OTT platforms, would have killed the mega opus production values, CG works (animations), screenplay, etc.

The theatrical experience is irreplaceable.

The films that are planning to move to OTT were made for theatrical viewing. They cannot be watched on your phone to get the complete impact of sound effects, VFX, story, etc.

They can also save on print and advertising costs. Storytelling can come out much better in non-commercial films or experimental films.

People across the world will still be cautious for the whole of 2020 and they will increasingly embrace digital entertainment modes.

Personally, I conducted a small poll on Linkedin.com and 70% of the respondents voted for their preference of watching a new release on their OTT platforms. Truly, covid19 has impacted the media consumption habits and preferences of the consumers.

Most of the big banner films have delayed their releases to the last quarter of the year 2020.

The theatrical-OTT rift is felt across the supply chain.

Film promotions have shrunk from lavish affairs to webinars and telephonic interviews.

“Is it meant for audiences that enjoy watching movies at the comfort of their homes or is it a suspense thriller with jaw-dropping effects”, then it is definitely meant for theatrical release.

“The content of the movie should dictate the medium of its release.”

Competition from OTT (over the Top) platforms is not new for theatres as they have seen worst times & challenges during VCRs, VCDs, DVDs & piracy days.

The truth is that we all enjoy going to the theatres which is something that will never change.

Irrespective of whichever medium is the winner, according to me, watching a film in a theatre is an ultimate experience and I don’t think people will ever stop doing that?

It is an experience; it is like a family outing for many of us.

Want to be more visible on social media? read this article.

How do producers make money from movies?

Usually, a portion of theater ticket sales goes to theater owners, with the production house and distributor getting the remaining money.

The percentage of revenues an exhibitor (theatre owner) gets depends on the contract for each film. Many contracts are intended to help a theater hedge against films that flop at the box office.

That means the exhibitors cover their losses by gaining higher margins from the hit movies.

Overseas rights, off late, has become the major source of revenue for the production houses as well as exhibitors.

Bollywood movie, Dangal did more business in China than in India. (In India too, it was a blockbuster though). 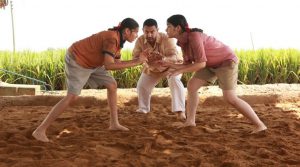 It all started with Star Wars. Since the George Lucas sci-fi saga began back in 1977, the franchise has made billions in revenue from toys alone, not to mention licensing income from other third-party companies. In 2015, “Star Wars: The Force Awakens” brought in $700 million in retail sales.

Movie recovers its costs even prior to its release (at least for the production houses), through the selling of satellite and music rights.

And now, we have rights for OTT platforms to add to these revenue streams.

Not to forget, the inflight cinema entertainment rights are another channel that is now gaining popularity.

Airports are the new malls? Read the article here.

It forms a part of ambient marketing.

The brands enjoy additional visibility to influence the viewer’s preferences and behaviors.

Magic of movies and big screens shall always remain and will leave its lasting impression on the generations to come.

Time shall only decide which medium shall emerge a winner i.e. OTT platforms or theatrical experience.

Being a movie lover, this article is my attempt to demystify the business of movies and gain new insights into the world of commercial movies.

Hope you will find it useful and entertaining.

Watch the interview of the filmmaker SS Rajamouli (Director of the movie, Bahubali) wonderfully summarizing the current debate of OTT vs Theatre.

Ritesh Mohan is a passionate retail professional with over 20 years in the Retail sector, handling some of the biggest brands in beauty, fashion, and fragrances retail & FMCG sector. He has been instrumental in the growth of some of the regional brands as well in the Middle East region. Ritesh specializes in Retail management, Product development, and Brand Management, Retail Operations, Sales Management and Franchising & Business Management. He strongly believes in empowering business owners with his wisdom & experience of around two decades in the industry.